Joan is the Office Administrative Assistant for Gethsemane and St. Patrick Cemeteries. She began her service at the cemeteries on December 9, 2015. Joan is known for her large Sunday dinners with her family. When asked what her favorite food is, Joan answered: “I like most anything.” Joan is an avid reader. Her favorite books and authors include Privilege of Being a Woman, Diary of Divine Mercy, Uniformity to God’s Will, Holiness of Life, Maurice and Therese, Interior Freedom by Jacques Philippe, The Interior Castle, and What Happens At Mass by (Abbot) Jeremy Driscol. Joan says that her favorite places include Mount Angel, Oregon, Rome and Assisi, Italy, Kalwaria, Poland, and home. Her hobbies include reading, cycling, travel/pilgrimaging. Some people have asked Joan how she got involved in cemetery ministry. She says “I was doing some part-time work at the retreat center and heard about the opening at Gethsemane. Now, ‘I work in the Garden’. It is a gift to work within ministry.” 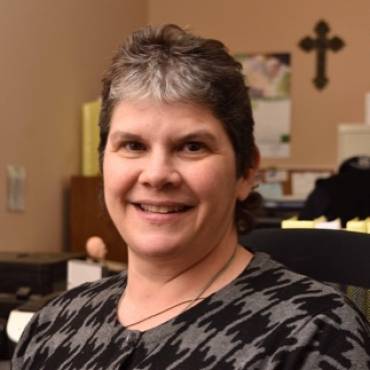